Is Lobster Just Another Fish in the Sea?

Lobster lovers may not know this, but lobster wasn’t always considered a luxury food. During the 1600s, this delicious seafood was plentiful and considered a normal meal for those living near the ocean. Lobsters were considered a “poor man’s food” during this time, and prisoners and servants were usually fed the dish by European colonists. Because lobsters were so abundant, those with wealth weren’t interested in eating meals with lobster. 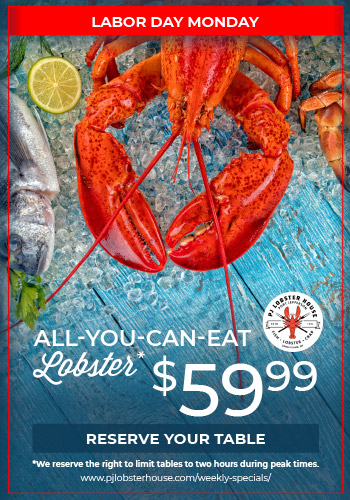 Fast forward to the 1800s and Maine became an area for wealthy individuals to escape the big city and relax by the ocean. It was during the 1800s that lobster became a delicacy enjoyed by rich urbanities residing in Maine. From the 1800s to today, many consider lobster a luxury food, but is this still the case?

Yes! Lobster is still considered a luxury food, but for even more reasons than you may think. Not only is lobster a traditional status symbol, but it is also a healthy meal. Restaurants and markets that sell lobster seek the healthiest, most sustainable, and cleanest fish available. Lobster is also prepared with luxury ingredients, such as vegetable juices, homemade butter, and healthy salads.

Not only is lobster a status symbol, but it is also delicious. If reading this blog post about lobster has your mouth watering, consider stopping by PJ Lobster House this Labor Day. On Labor Day Monday, our restaurant will serve all-you-can-eat lobster for only $59.99. Reserve your table today by visiting our website or giving us a call at 631-473-1143. You don’t want to miss this delicious meal special, so gather friends and family and head to PJ Lobster House this Monday! Find our location at 1 North Country Road in Port Jefferson.