Fish and chips are the perfect pairings. This traditionally British meal has made its way to the United States because of its simple, yet satisfying flavor. Have some fish and chips at PJ Lobster House. 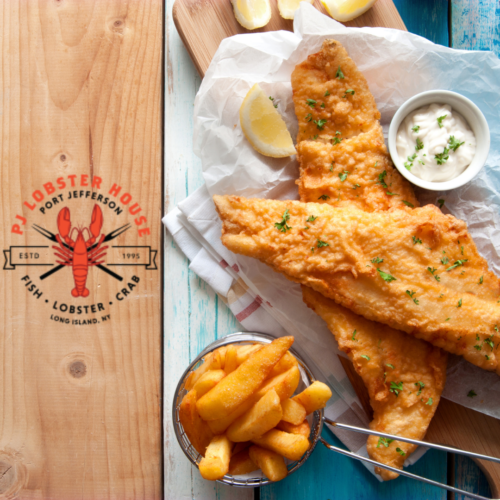 Fish and chips have a long history that started in England during the 17th century. Sir Walter Raleigh is believed to have brought potatoes to England for the first time, even though it is believed that the French invented fries. There is also some controversy as to which city in England started the fish and chips trend. Both Lancashire and London credit themselves as being part of the meal’s roots. During the 1800s, chips were a cheap and simple food for people of the industrial north. Meanwhile, fried fish was frequently enjoyed by people in London’s East End. Eventually, the people of England decided to pair the foods together and the rest is history.

It is believed that the first fish and chip shop opened in the North of England in Mossely near Oldham, Lancashire, in 1863. The shop sold fish and chips together out of a wooden hut in the market. Eventually, this market hut was transferred to a permanent shop across the road. In the window of the shop read a sign, “This is the first ship and chip shop in the world.” However, during the 1860s, it is said that a Jewish immigrant named Joseph Malin actually opened a fish and chip shop in Cleveland Way.

Regardless of who actually opened the first fish and chips shop, this British meal has been satisfying people for centuries. Over time, the dish made its way to the United States. If you have a craving for fried fish and french fries, head to PJ Lobster House.

At PJ Lobster House we have a traditional fish and chips basket that you have to try for yourself. We use beer-battered cod filets and seasoned waffle fries to put together this menu item. The basket is served with coleslaw, tartar sauce, and is available with a house garden salad or side dish as an upgrade.

To satisfy your fish and chips craving, head to PJ’s Lobster House. You can find us at 134 Main St. in Port Jefferson, NY. We look forward to seeing you here soon!